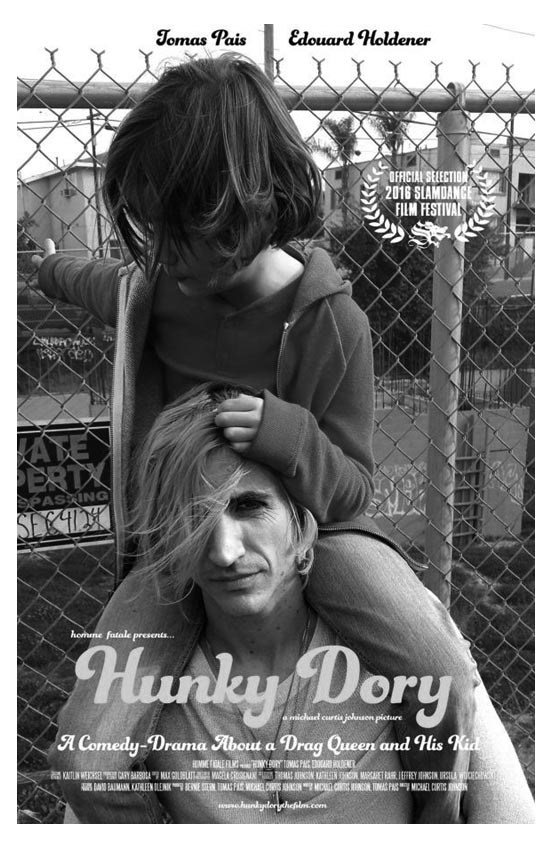 A glam rock dilettante's life takes a dramatic turn when his ex unexpectedly drops their
11-year-old son off for the week.
Narcissistic, bisexual Sidneyis stuck in a glam rock-informed state of arrested development, still harboring aspirations of becoming a successful musician. But his hedonistic Silverlake, Calif.,
lifestyle is somewhat cramped when his sweet son Georgie is dumped at his doorstep by his
paranoid-schizophrenic ex, forcing him to enlist the babysitting services of a jaundiced hooker in order to perform a low-tipping gig. The one thing that he has kept from George is the way he
makes a living - preferring instead to romanticise his status to 'up and coming rock star'…
“‘Hunky Dory’ can be described exactly the same way music critic Stephen Thomas
Erlewine described David Bowie’s 1971 album of the same name: “a sweeping, cinematic mélange of high and low art, ambiguous sexuality, kitsch, and class.” – Slug
Magazine “Some albums just really do lend well to film, and I’ve been waiting and waiting and WAITING for somebody to attempt adapting an album as opposed to a book. Oh wait, guess what? Hunky Dory just did it. That’s right! (It captures) the tone and feel of one of the most cinematic albums of all time, David Bowie’s Hunky Dory. And more importantly, the film reflects the themes and atmosphere of one of Bowie’s deepest and most sonically impressive albums.” – Film Colossus
“You may be able to see the restrictions of the film's budget, but the talent on display shows no such limitations.” – Eye For  Film

Awards – 5 wins and 7 nominations including